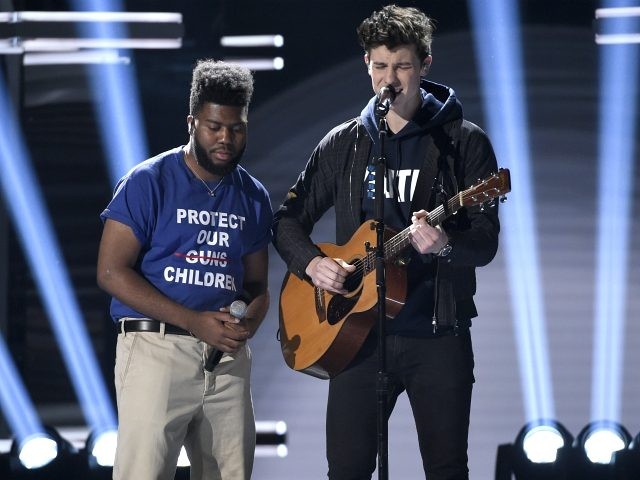 The BBMA’s: A Disaster Waiting to Happen

I love music awards shows. I love seeing my favorite artists win awards and seeing all the different artists perform. But I also really, really hate them. I hate them because everyone knows that all the celebrities in attendance are going to use their platform to push their political agenda. This is exactly what happened.

The Billboard Music Awards took place last Sunday and it was filled with entertainment, talented artists, and everything else you’d want in an award show. But towards the end of the show, something happened. Those running the show decided that it would be a good idea to have a “moment of silence” in memory of the shooting at a Texas high school about a week prior. There’s nothing wrong with a moment of silence, but it’s what they did after that bothered me. Along with this moment of silence, Shawn Mendes and rapper Khalid performed their song “Youth,” which I believe to be a politically motivated song. Khalid was also wearing a shirt that read “protect our guns children,” with the word “guns” crossed out. If that wasn’t enough for you, Shawn and Khalid were joined on stage by students from Marjory Stoneman Douglas Highschool, which has become fairly well-known because of the shooting that took place at this school and many of the students became activists for, and against guns.

It should be pretty obvious what message these celebrities are trying to convey, and that message is that they hate guns and want to take them all away. They’ll sever say outright they want to take all the guns because let’s be real. We all know that probably every single one of them has armed security around them wherever they go and they also had armed security protecting the building the BBMA’s were held at. So the narrative of taking everyone’s guns doesn’t really work for them because that means they wouldn’t be protected anymore. Which, isn’t that self-defeating? Khalid wore a shirt that said to protect our children instead of our guns. How about instead, we protect our children with guns? Celebrities shouldn’t be the only ones who get high-level security and protection. We protect our banks and airports better than we protect our schools. The least we could do is have multiple armed security guards at every school as well as metal detectors.

Now, let’s rip on celebrities. *cracks knuckles* For some reason, celebrities seem to think that a lot of people actually care when they talk about politics. Take LeBron James, for example. From time to time, LeBron speaks out on politics. Which, he has every right to do that, it’s his 1st Amendment. But that doesn’t mean that he actually knows what he’s talking about. Keep in mind that LeBron only has a high school education, he never went to college. Sure, everyone is entitled to their own opinion but that’s not the same thing as everyone’s opinion having the same value. That would be ridiculous. There are people whose opinions matter more than other people, that’s just how it is. The same goes for every other celebrity. I can’t think of any celebrities who have studied law or politics so they shouldn’t be using their platform to attempt to influence their millions of fans when they really have no idea what they’re talking about. Sure, there’s a small base of their fans who actually care what they say and think they’re a genius on policy because they’re good at music or whatever else they do, but the majority of Americans do not care. I’m not saying they have no idea what they’re talking about because most all celebrities lean left, I’m saying it because they don’t study the issues.

Jimmy Kimmel used to be one of the absolute worst when it came to uses his platform to push his political agenda. He used his own child as a political prop to push his agenda for health care, showing how truly weak his arguments are. Kimmel has also pushed for gun control and ripped into President Trump multiple times on his late-night show until recently when he came out and said something along the lines that Trump wouldn’t be the target of his jokes anymore. I wonder why? Probably because he realized he’s getting fewer viewers and upsetting more and more people on the right by constantly attacking Trump. Which, this is a smart move for Kimmel. But at the same time, people on the right sort of count on people on the left being nasty and hateful in order to gain more Republican voters. We’ll just have to see where this goes.

Wrapping up, according to Breitbart News, the BBMA’s had a rating of 2.1/8, which is a 9% loss compared to last year’s show. While the rating loss might not be entirely attributed to the politicization of TV programs, it’s definitely a factor. People just want to watch their sports and entertainment shows without having politics thrown in their faces, I know this was certainly the case for me as I was watching the BBMA’s and was very upset that they turned it into a political stunt.