Donald Trump and the Left: Battle of the Supreme Court

About two months ago, President Trump announced his pick to replace Justice Anthony Kennedy in the Supreme Court after Kennedy announced his retirement from the court a few weeks prior. Trump chose Brett Cavanaugh of the U.S. Court of Appeals for the District of Columbia and as you can imagine, the left lost their collective minds.

This past week, the Senate Judiciary hearings for Brett Kavanaugh began and continued to show why these are just a complete waste of time. They’re a waste of time because most, if not all of the senators already have their mind made up on whether or not they will vote to confirm the nominee and so spending hours upon hours asking them questions about how they would rule on certain cases and what their opinions are on other cases is pointless. If the senators want to know how a judge will rule, they should simply look at records of past decisions they have made or if they really want to ask the nominee a question, do it in writing instead of in person so that grandstanding isn’t possible. This leads me right into my next point in that the main reason these hearings are a waste of time, is that these hours where senators ask the nominee questions, it very often turns into the opposing side grandstanding and potential future presidential candidates “roasting” the nominee in attempts to make themselves look heroic. Senator Cory Booker, who is just a drama queen beyond description, is a prime example. Booker is known for having “tears of rage” over the rhetoric of President Trump’s administration as well as having a slight anger problem. See below: 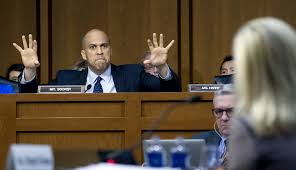 Booker put on one heck of a show this past week, and let me tell you, it was amazing. You’re going to think I’m making this up because it’s so ridiculous, but this really happened and he actually referred to himself as Spartacus at one point. Watch here.

To give a bit on context, in the video, Booker is talking about releasing documents to the public about Brett Kavanaugh that will potentially damage the nominee, but it’s against Senate rules to do so. However, Booker says he willing to face the consequences of his actions and be expelled from the Senate which if you watch the video, it’s not hard to tell that it’s all an act. In reality, he wants to get expelled from the Senate so that he can come forward as a hero to the left which will give him even more momentum as a potential presidential candidate for 2020. He then says it’ll be his “Spartacus” moment when he releases the documents. Which, here’s the best part about all of this. The documents he was going to release were not only not at all damaging to Kavanaugh, only showing that he wasn’t a racist, they had already been cleared earlier by members of the GOP. So well done, Cory Booker. You played yourself and showed America what an ignorant fool and grandstander you are. There was a parody dialogue of Cory Booker and a cashier going around and it went like this:

Cory Booker: “I am getting refills without paying for it.”

Booker: “Got a refill and you can’t bully me.”

Booker: “I AM SPARTACUS.”

All of this goes to say that all of this is such a big deal because once the Senate approves Brett Kavanaugh, there will be a right-leaning majority in the court, which is also due to the fact that earlier in his presidency, Trump had his first Supreme Court justice pick in Neil Gorsuch, and he will likely get another pick when Ruth Bader Ginsburg either retires or dies, as either one of those looks to be coming very soon. But how do I know that the Senate will confirm Kavanaugh? Thanks to former Senate Majority Leader Harry Reid in 2013, the “nuclear option” came into play, which means that all executive and federal judicial nominees by the president no longer require 60 votes in the Senate to be approved, they only need a simple majority of 51 votes. So now thanks to Reid’s actions, Republicans should be able to breeze through this nomination with no problem regardless of how much Democrats try to block and obstruct the nomination. Democrats began pushing for the nuclear option after Republicans “unreasonably partisan obstructed” (in the words of The Washington Post) President Obama’s three picks for court justices. So now, the rule that the Democrats made back in 2013 to avoid the Republicans blocking the presidents nominates has come back to bite them because Republicans only need 51 votes to confirm Kavanaugh, and that’s exactly how many Republicans are in the Senate and let’s be real, no Republican is going to oppose Trump’s pick. There might even be a few Democrats would are up for reelection in a few months who would vote to confirm Kavanaugh for fear of losing their seat if they vote to oppose. After the Democrats passed this new rule of the nuclear option, then-Senate Minority Leader Mitch McConnell said on the Senate floor, “You’ll regret this, and you may regret this a lot sooner than you think.” Oh, how beautifully all of this has aged.

Democrats have been saying that they are going to fight Trump’s pick in Kavanaugh, with Senate Minority Leader Chuck Schumer saying, “I will oppose this nominee with everything that I’ve got.” Well, I have some back news for you, Chuck. There’s nothing you can do, thanks to Harry Reid’s stupidity back in 2013. As long as all Republicans vote to confirm Brett Kavanaugh, there’s nothing that the Democrats can do to oppose this pick.

2 thoughts on “Donald Trump and the Left: Battle of the Supreme Court”