Intolerance is the New Tolerance

On Monday night, Senator Ted Cruz and his wife went to Fiola, an expensive Italian restaurant in Washington, D.C. Their plans were to have a relaxing evening with a nice dinner, but they got just the opposite. Left-wing activists surrounded their table and began heckling the couple, chanting, “We believe survivors,” in reference to the recent events surrounding the Brett Kavanaugh hearing. Smash Racism DC tweeted this out in response to these events: 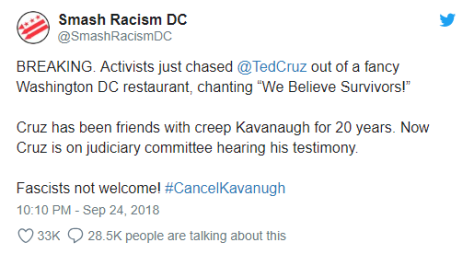 Smash Racism DC is part of the Antifa movement, according to their Twitter bio. While “Antifa” is short for “anti-fascist,” these people are indeed, fascists. Fascism is defined by Merriam-Webster Dictionary as “a tendency toward or actual exercise of strong autocratic or dictatorial control.” Although they claim to be against one person or group having absolute power, they show exactly the opposite when they protest in the streets, cause riots, and beat up people who disagree with them. Of course, this is very ironic but Antifa is, without a doubt, a domestic terrorist group.

Antifa wasn’t the only group of people who were loving this story. Leftists, in general, were very happy with the treatment of Cruz and his wife. This has also been true in the past when Representative “Mad Max” Maxine Waters called for the public harassment of people who work for the Trump administration (see here), Candace Owens and Charlie Kirk getting harassed by leftists while at a restaurant (see here), and many other times. Are you ready for some more irony? The same people who harass and support the harassment of conservatives in public and force them to leave restaurants are the same people who want companies to be forced to serve everyone without any discrimination.

As I’ve stated in a previous post, (see Business and Government) I believe that any non-government entity has the right to refuse service to any person or group of people for any reason and that the government has no business telling a business who they ought to serve. But these radical leftists want to have it both ways. They want to force any business, take Masterpiece Cake Shop and Jack Philips in Colorado, for example, to serve anyone and everyone regardless of if it goes against their religious, moral, or any other convictions while at the same time screaming at people to leave a restaurant simply because they disagree with them.

Intolerance has become the new tolerance for the left. They claim to be loving and accepting of everyone except those they disagree with. They will completely toss out basic science and biology by suggesting there are any more than two genders, and by renaming the vagina “front hole” in order to be less offensive to transgender people. They will tolerate radical extremists, whether they be Antifa or Islamic terrorists. They support the killing of millions of innocent babies. They support all of these terrible things yet one thing they just can’t stand is having someone who disagrees with them. If you do this, you’ve committed the worse crime ever and you’re automatically a terrible person and a racist, sexist, bigot, Nazi, homophobe, etc. and should die. While the Republican party has maintained basically the same positions since 2010, the Democratic party has moved farther and farther to the left, according to an article from The American Interest. This move farther to the left is what has caused such a great divide in today’s politics and social issues. Our country would be in much better shape if only people on both sides were willing to hear, and have conversations with those of opposing views.